Sorry I’ve been so bloody awful about keeping the blog up to date. At the moment days all just blur into one – but I’m taking the opportunity of Amy having a long weekend off work to get some catching up done!

Our little lady is nearly six weeks old now. The first month of her life was such an adventure. It has certainly had its ups and downs – ups more than downs of course. It’s been a huge learning curve for me, Amy and for Eden too. We’re all learning to be in eachother’s lives.

Nobody tells you these things about parenting. People love to tell you how tired you will be and how your life isn’t your own any more and how you won’t be able to do any of the things you love any more. Nobody tells you that you’ll spend the days negotiating with a tiny little human who is playing a game to which only they know the rules. But the other thing that people don’t tell you is how utterly in love with this little human you will be. Yes, your life changes, but in a great way.

So, much of the first week after Eden was home was spent in hospital with jaundice. I’m not going to go back over that because it was an absolute nightmare and was almost certainly the biggest “low” of our life with her so far. You can read about that admission here. Our post was shared by the Fearless Formula Feeder on Facebook and Twitter and invited a fair amount of comment and debate – most of which was very supportive. It was great to know that I wasn’t overreacting to the position that we were put in. But anyway, I’ve already said enough about that.

For the few days after coming home, we were inundated with family visits. Everyone wanted to meet the new little lady and she was happy and sociable. That’s a lie. She was mostly asleep… It was lovely to see so many people and our living room very quickly became filled with gifts. Already it was clear how loved Eden is. She’s a lucky little girl. I’m still sorting through all of her gifts at the moment! I have to say though, entertaining constantly is exhausting as well as having a newborn.

The week or so between Eden being born and Christmas was a busy one. Somehow between the hospital admission and visits from family, we managed to fit in a trip to see the new Star Wars movie. Yes, with the baby. There’s a cinema chain in the UK that does screenings called “The Big Scream” which are for parents and babies under the age of one. The movie isn’t as loud and the lights stay slightly up AND the tickets are half price, so we snapped up that chance. I’m not interested in Star Wars so figured if she freaked out, I could leave. But nope. She was good as gold. Slept pretty much for the whole movie, just waking up for a feed half way through. That’s my girl! 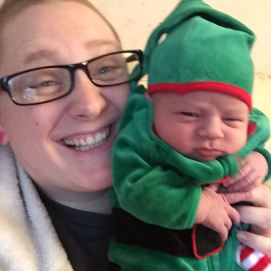 Christmas soon rolled around and Eden was a whole eleven days old by that point. We were totally exhausted so did basically nothing except for open presents and then sit in front of the TV and nap on the sofa. We didn’t even get around to making Christmas dinner until around 4pm! I was in a state of awe for most of the day that we finally had our little one and were spending Christmas with her, even though she was too little to know or care what Christmas is. We spent most of Boxing Day doing much the same as we had Christmas day, but it was needed.

The week after Christmas we were out and about a fair bit. Amy was lucky enough to have four weeks off work, so it was easy enough between the two of us to get out of the house – although some days we didn’t make it out of bed until after midday! We wandered local shops, stopped for feeds in coffee shops and just generally mooched around. It is always nice to have a bit of normality when your world has been thrown around a little bit, so getting out and about did the trick for us. And of course the fresh air did wonders for everyone.

I Am Three Weeks Old!

Soon, Eden was three weeks old. By this point we had settled into a pattern of feeding roughly every three to four hours. Except for when she had jaundice, we have always demand fed. She generally sleeps between bottles even now, and at night she tends to wake up at 1am and then around 5am, before going back down until around 8am when we would start the day. She’s generally a pretty calm, happy baby. We did find that she struggled with wind whilst using the Tommee Tippee bottles, so we switched to “Latch” bottles by Munchkin, which she seems to do much better with. Also, for anyone on the fence, The Tommee Tippee Perfect Prep Macine is worth every single penny. There’s nothing quite like being able to whip up a bottle in less than two minutes for a baby who wakes up screaming. It’s just a little life hack that makes things a little it easier.

Now that her little belly button has healed, we jumped in with her first bath some time around four weeks. The first one she screamed and screamed and SCREAMED! To be honest I think we had been a little overcareful and the water was a bit too cold for her. The next bath, she was happy as anything in there and even had a little chat with mr Ducky! We’re doing baths pretty much every other day at the moment and using some lavender products that Amy’s aunt bought us. They seem to really help her to sleep earlier, which is a blessing as we had got into the habit of staying up until after her 1am feed!

We’ve also ended up cosleeping, much to my surprise. It wasn’t something that I planned

on, but it just happened and now I’ve realised that we both sleep easier and for longer if she’s in with us. I did of course do some research into safe coseleeping before doing it full time, as the risk of SIDS was what stopped me considering it before she was born. So, we’re safely cosleeping and loving it at the moment. It’s nice to have her so close. Although she does tend to sleep like a starfish. I said to Amy that if we do end up having any more children, we need one of those side crib things so they can sleep next to me but without starfishing across the whole bed leaving me mushed in the middle. 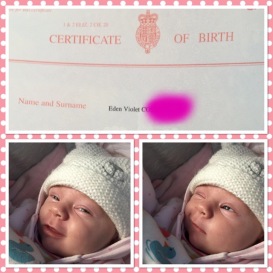 Eden an official human being. it was just a case of giving some details, showing ID and signing the register, but it was quite emotional as I genuinely had started to believe that this would never happen for us, so to be registering our little lady’s birth was a major milestone. As a side note, I loved how inclusive the registry office were. Government buildings even in London seem to be very “traditional” but Lambeth registry office had pictures and representations of all kinds of families. It’s lovely to feel “normal”, whatever that means.

The dogs are absolutely doting on her. I worried a little as when we first got home, Loki was a little bit barky and  scared of her, but he is best friends with her now. Misty is still a little wary, but she just doesn’t come near her really. She occasionally comes and has a little sniff before carrying on with whatever she was doing. Loki loves to lay beside her and really enjoys licking her feet – something that Eden finds hilarious but we are trying to stop! I love that they’re all getting on well and am looking forward to watching them all grow together. 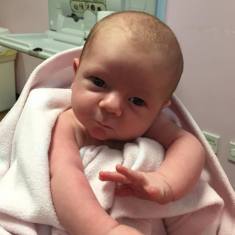 Eden has been weighed twice at the Well Baby Clinic since coming home. The first weigh in at four weeks, she weighed 8lbs8oz and we had her weighed again yesterday and she’s at 9lbs8oz, which is a fab jump from her birth weight of 7lbs9o.  She’s following nicely along the 50th percentile, which we and the health visitor are very happy with. She also had her very first dr visit, thanks to a case of thrush. But the less said about that, the better!

That was one of the things I didn’t expect – the anxiety about her health. Is she ok? Is she crying because she’s a baby or is it something else? Is she gaining enough weight? Is she gaining too much weight? Should she be eating this much? Why isn’t she eating as much as normal? It’s a constant whirlwind, but we are very lucky that we have a lot of medical support around us. So, as much as we mostly do carry on just me and Amy, if we do need support we have plenty of medical professionals to turn to. Our health visitor is lovely, which is very helpful as she will be around until Eden is five!

As for me, I have my six week check on Tuesday. I feel absolutely fine in myself. Blood pressure is back down, I don’t feel as swollen or broken any more and the stitches have healed nicely. I also stopped bleeding around a week ago, which is always helpful. I worried that it would never stop! I’m not too sleep deprived – if I’m honest I was more tired when I was working twelve hour shifts. It’s a different type of tired, I guess. I do get anxious and I do occasionally have low moods, but nothing intrusive, which is good because post natal depression was something I worried about.

So, that’s the first six weeks of Eden’s life! It’s been exhausting but so SO rewarding and I’m so happy that after such a long time she is finally here. I’ll try and update more often from here on in, now that we’re getting into some sort of routine! 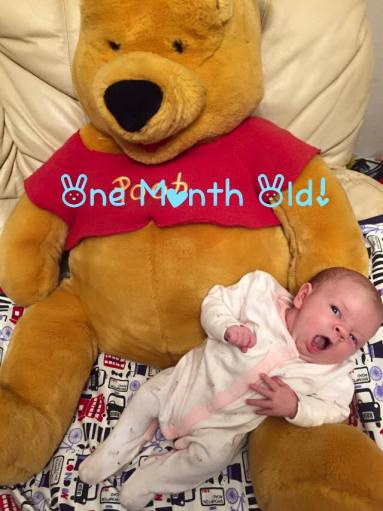