How to feed your child is one of the most important things to think about when you’re pregnant. For us, it was a choice we made after considering what would work best for us as a family. We’ve never breastfed here. For Eden, it’s been bottles since day one. Here’s ten things I didn’t know about bottle feeding before we embarked on this adventure.

1. Not all bottles are created equal.

Anti colic? Self sterilising? Natural flow? Wide neck? Narrow Neck? Glass? Metal? Plastic? Disposable? All on the market! As a mum-to-be I was so confused by all the different types of bottle! What I leant, though, is that it’s not up to me. It’s up to Eden.

We bought a LOT of Tommee Tippee bottles. They’re the ‘market leader’ apparently, so we figured Eden would like them. Plus, they come in pretty colours. What’s not to like? So… yeah… Eden didn’t like them. She became skilled in turning the teats inside out within seconds and then crying because she couldn’t get milk. We ended up trying a bottle that we had received for free at The Baby Show called “The Latch”, which is made by Munchkin. Immediately things changed. She got on SO much better with these. Consequently we had to go out and buy all of those bottles. The Tommee Tippee ones are still gathering dust in her wardrobe.

2. Real advice on bottle feeding is hard to come by.

With the Baby Friendly Hospital Initiative meaning that many hospitals now are not “allowed” to “promote” bottles, dummies or anything “artificial” in the quest for more mothers breastfeeding, coming by advice about bottle feeding is near impossible. In our situation, we were formula feeding and needed advice about that. You would think we had asked for advice on how to break all of Eden’s bones! When Eden was five days old, I asked a midwife who visited us at home how much she should be drinking. She told us “just feed her until she’s sick. Then you’ll know she’s had enough.” BAD advice! “Baby Friendly” hospitals over here  in the UK are not allowed to speak to families about formula. Not allowed to provide safety information or talk about how much baby should be drinking. Just “breast is best”. Helpful, yes? Thankfully, the hospital Eden was born at did give some helpful advice and did support our choice.

3. You can’t second guess the baby.

Baby drank two ounces in the last feed? You’d think you’d be safe to make two ounces again, right? NOPE! This time she wants three, or just one. And she will screeeeeeam until she gets it. I lose track of the amount of milk that heads off down the sink because Eden decided she wasn’t as hungry this time, or that amount of times I’m running for the formula can because she decided she wants more. They like to keep us on our toes, these small folk.

I did not know this was a thing. I looked at my starter pack of bottles and thought “size one? Size two? What does it mean? Turns out baby needs different teat sizes depending on their development stage and on the type of milk. For example, once we put Eden on reflux milk we had to move up a teat size as it’s thicker and therefore needed a bigger hole to pass through. We recently moved Eden up to size three teats as she started falling asleep drinking through the size two and she’s happy as ever. There are also apparently variflow teats, but they’re not available for the brand we use.

Sterilising is the bane of my existence. It’s super important because of delicate little tummies, but MAN! Pushing everything into the steriliser and waiting for it to finish, then baby wants feeding and the steriliser and contents are still hot as hell, so you almost take off a finger trying to pluck out a bottle. Occupational hazards I guess!

6. You’re not the only one who can feed.

This is my favourite thing about bottle feeding. You’re not on the clock. You can hand baby to someone else to feed while you take a shower or eat something. For the first two months or so of Eden’s life me and Amy fed her exclusively. We did that for bonding reasons and because we wanted to get used to her and her get used to us. Plus, she had reflux so I didn’t feel the need to let anyone else be covered with vomit. Nowadays, anyone can give her her bottle. It’s very helpful.

You need to lug around a fair bit of stuff if you’re bottle feeding. Bottles, formula, water… They all take up valuable space in the changing bag. We found a formula dispenser makes a great deal of difference as we can then carry pre-measured helpings of formula powder. Originally we were using the individual pots and that was always a faff!

A lot of people think you must always warm baby’s bottle. It’s a myth. Sometimes I think Eden prefers her bottles relatively cold as she always snarfs them down when we are out and about. Most of the necessity to warm comes from making bottles fresh with boiling water, but baby will always have a preference too. Some like them as hot as they can get without burning, some prefer a cool beverage. Others (like Eden!) change her preferences like the wind.

9. All formula is essentially the same.

The very best advice I got was from my hospital website. “All formulas have to reach a minimum standard, and independent evidence shows that there is very little significant difference between the formula brands.” (St Thomas’ Hospital) The advice was basically to buy the most cost effective and then work out what baby liked from there. We started on Cow and Gate and eventually moved on to Cow and Gate anti-reflux because of Eden’s reflux. But we have also tried Hipp Organic since and used a Carobel thickener with it, which she seems to like too. It’s about what works for you and baby in the case of formula.

Feeding a baby at first is challenging, however you are doing it. It is one of the top “mummy war” type conversations, so just know that however you feed your baby, whether that be bottle, breast or tube fed, whether you’re feeding them formula milk, breast milk or you’re combination feeding, you are doing a great job and you are a great mum. 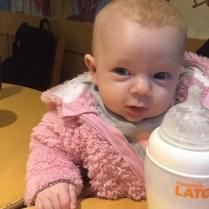 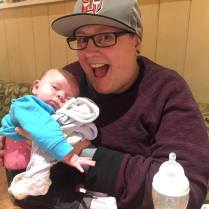 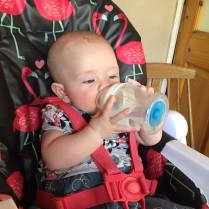 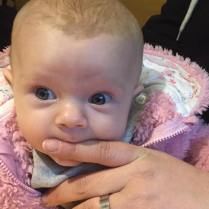