With Eden now pretty much closer to a year old than to newborn, I got to thinking about the firsts that we have experienced since she was born on that cold day back in December.

Firsts with a little one are so much fun! We’ve had all kinds of firsts at this point in Eden’s life; her first bath, first smiles, first babbles, the first time she rolled over and first trips to the park, the cinema and more coffee shops than I have ever been to in my life. 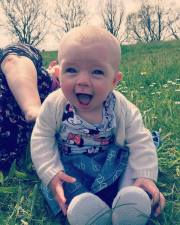 I love the park!

Sometimes it’s hard to keep track of the firsts. We have one of those handy sets of milestone cards but sometimes we just plain old forget to use them. Our first trip to the park was an impromptu affair undertaken on a sunny day on the way back from her vaccinations. Maybe we should start carrying the pack of cards around with us just in case?

Now that Eden is getting older, she’s becoming more active.Our days used to be a mix of cuddling, feeding, sleeping and her playing in her bouncy chair or on her play mat. Nowadays, she’s a lot harder to entertain, so we have to be a little more creative with containing her active self.

I swear this kid was born frustrated. She’s only just learned how to sit up by herself and 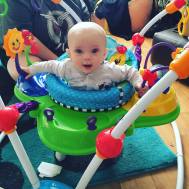 she’s already desperate to move! She can just about army crawl backwards, but forwards is a total impossibility. Amy and I often get used for support for her to stand up, but obviously Eden can’t stand up herself or walk yet. Doesn’t mean she doesn’t want to. I think in her head she can already run around after the dog! She gets rather frustrated just sitting on her bum or bouncing in her bouncer, so we go for lots of walks out and about to try to keep her (and me!) sane.

One of the most fun “firsts” that we’ve been experimenting with recently is food. Eden LOVES her food! We’ve been doing vegetable purees from four months, but we are now introducing some elements of baby led weaning as well. She’s loving playing with her food, feeling the different textures and trying the different tastes. The dogs also love sitting around under the high chair waiting for the inevitable dropped bits of whatever Eden has today.

So far we’ve tried lots and lots of purees. Eden’s favourites so far have been carrot, red peppers, sweet potatoes and apples, sweet potatoes pumpkin apples + blueberries as well as sweet potato, swede and prunes. As you can see from the video above, peas did not go down too well! We’ve been introducing fruit as well but have been very mindful not to introduce too much sugar to her tiny tummy. Eden most enjoys strawberry and banana puree, but she’s also tried strawberry and apple, mangoes, peaches and pears. All of which have gone down pretty well. 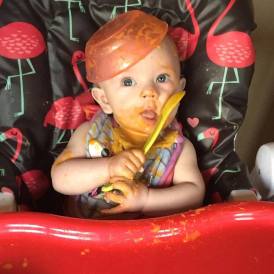 Dairy was another thing that we wanted to begin introducing, so when we joined up with BritMums to sample “My First Petits Filous”, we figured this might be a hit with our little lady. Here’s how her first tastes went…

As you can see, they weren’t an immediate hit, but after the first taste she wolfed the tub down! I love this yoghurt because there are no artificial colours, flavours, sweeteners or added preservatives. It has a pleasant vanilla taste and the main ingredient is milk with all ingredients 100% naturally sourced. Developing strong bones is super important, so the fact that My First Petits Filous contains calcium and protein is a huge draw. Also, it has a very low sugar content and is suitable as part of a balanced weaning diet from six months of age. They are gentle on little tummies, which is good as Eden has been a little under the weather with chicken pox as of late.

We’ve been having a yoghurt once a day since starting them and they are fast becoming Eden’s favourite part of eating! Because they are high in dairy and low in sugar, we have found that they are suitable any time of day, and Eden is certainly game whenever one appears from the fridge. They are something that we will continue to use as part of Eden’s diet from first tastes, right through to three meals a day.  Here’s some more pictures to enjoy of Eden eating her yummy yoghurts! 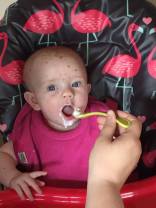 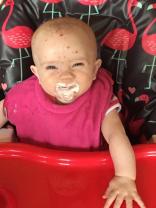 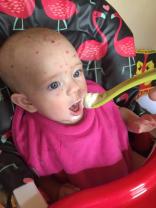 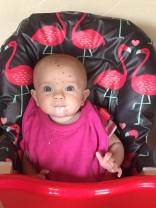 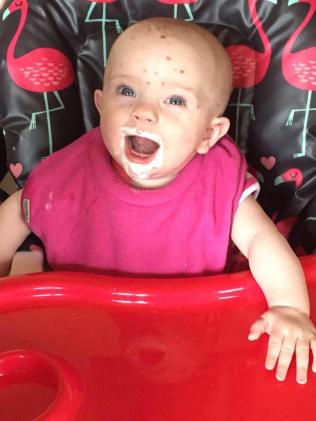 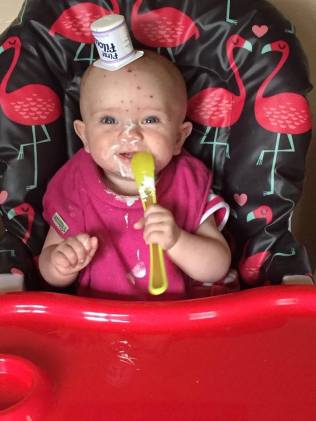 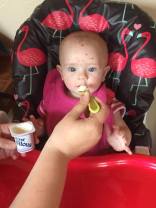 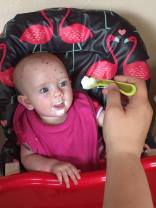 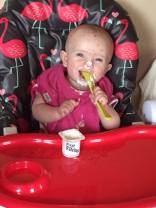 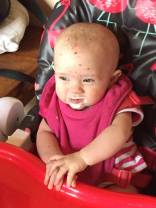 This post is an entry for BritMums #PetitsFilousFirsts Linky Challenge, sponsored by Petits Filous
We were supplied with My First Petits Filous for sampling purposes, but as always all opinions remain our own.