Our Morning with Little Tikes!

Last week we attended the launch of some fantastic new products with the lovely folk at Little Tikes UK. We’ve always had a couple of Little Tikes toys hanging around the house for Eden, so we were all interested to see what they would come up with next. 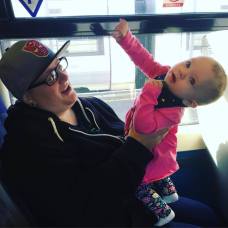 When we arrived at the venue in Covent Garden on the sunny morning after a very exciting train journey – everything is exciting when you’re nine months old – we were the first ones there! Eden was thrilled to bits to see a whole toy area stretched out ahead of her just ready to destroy, but we had a little breakfast before we let her roam free. We also got to chat with the lovely Emma Kenny, who is the child psychologist who Little Tikes have teamed up with to talk about that all important first year of childhood. We spoke about how smiley and confident Eden is and how smart kids are always exhausting. Much to Eden’s absolute joy, Emma hunted down a balloon and gave it to her. That became her new favourite thing in the whole world and she barely let it out of her sight for the duration of the event! (Unfortunately the balloon met an untimely Waterloo Bridge related end later that day… but that’s another story!)

Once the room started to fill up we let Eden loose to play. A lot of the new toys from Little 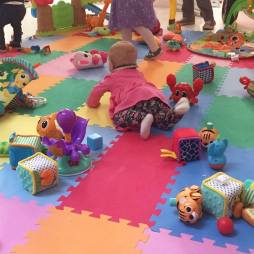 Tikes are aimed at children younger than Eden, but every child there seemed to be having a great time playing with everything that was available, not just the “age appropriate” toys. Eden particularly enjoyed the 3 in 1 activity walker and the Light N Go Activity Garden Treehouse, which has been added to her wishlist for Christmas! Many of the toys had lights and sounds, which are two of Eden’s absolute favourite things.  I did laugh when she picked up a crab and used it like a phone, however. I get the feeling she plays with her toy phone at home too much – haha!

Little Tikes were also revealing the results of a survey that they commissioned about the highs and lows of parenting, something which I’m sure you guys know I could discuss until I was blue in the face! The results were really quite interesting to hear about during the presentation with Emma Kenny. As you can see from the infographic later in the post, the results state that it takes about fourteen month to get the hang of being a parent. I was only saying to a friend a couple of days ago that in these early days, you just about get the hang of things and then everything changes, so I’d say that’s about right. It didn’t surprise me that the most heralded milestone was “sleeping through the night” as we all know that everything is easier with a full night’s sleep!

I totally agreed that parenting is about 50/50 giggles and graft. Just when I’m having the worst day ever and I’m wondering why we became parents and if we’re set up for raising a child, Eden does something amazing and I’m all gooey over her all over again. I’m surprised those feeling shocked as they adjusted to their new lifestyle wasn’t higher, though. I know there were nods all around the room when this was spoken about and I know nobody could have warned me for how much of a rollercoaster being a parent is.

The pressures was the part I agreed with most. The pressure to “be a perfect family” is immense! Th pressure to have a perfect child who never cries, a perfect house that is well kept and home cooked meals on the table. That’s pressure from outsiders, family members and from other parents. I’ve been told all kinds of things in the blogger world – “if you formula feed your baby you are violating her rights”, “why have a baby if you’re going to formula feed?”, “cosleeping makes them needy” etc etc. Then you get the same from family members – “when will you move her to her cot? You need to do it soon, you know,” “why don’t you go to baby group?”, “does she do x, y or z yet?” followed by a tale of how another baby has been doing X, Y or Z since birth. Then there’s the randoms on the street who are just trying to be nice bt manage to remind you that “you look tired” just when you’re about to cry into your latte. The media is filled with “perfect” families and I think the sooner people realise that there is no such thing as a perfect family, the sooner we can stop pressuring ourselves and others.

Anyhow, I thought it was an interesting survey with interesting results. The whole way through the presentation Eden was merrily trying to crawl UP other children and out of the toy area, so I kept having to retrieve her and place her back amongst the plethora of toys. At some point her balloon escaped and headed towards the ceiling, so we commandeered another.

It was soon time to head home, so filled with breakfast goodies and Eden thoroughly worn out from play time, we picked up our goody bag and said goodbye. The goodie bag meant that Eden now has some more lovely Little Tikes things to occupy herself with (one of them has come EVERYWHERE with her since!) and was excellent timing considering we ended up spending most of the rest of the day in A&E with a poorly Amy, but that’s another story for another day.

Thanks again to Little Tikes for inviting us! We had a lovely day and I don’t think I’ve ever seen Eden quite so exhausted! 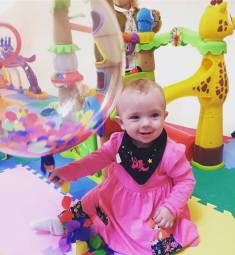 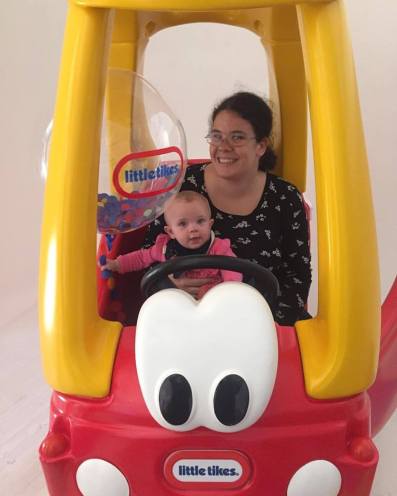