People and Their Food Judgements…

People are weird about food. They say odd things. They have odd ideas about food and weight and what it means to be healthy. Quite often, weight and food are the subject of judgement. People stick their nose in and voice their opinions whether they are being listened to or not.

I’m doing Slimming World at the moment. I haven’t changed much weight wise since getting pregnant with Eden, but even then I was overweight. 105kg and 5ft 7, with a BMI of 33. Not ideal. “Obese”. When I started the Slimming World plan two weeks ago, I was about 5kg more than that figure, with a BMI of “higher than that”. I’m not a big believer in BMI, but I know that at my current weight I do not feel healthy and that is important to me.

Anyway, so back to folk with their weird ideas. Weird ideas about food bear weird judgements about food. People LOVE to talk about what other people are eating. A “skinny” person eating a salad becomes an anorexic to the judgey mcjudgersons around them. A “fat” person eating a doughnut becomes “this is why they’re fat”. Recently I was the subject of one such judgement of my weight, what I eat and oddly enough, where I choose to holiday. This is the second time since we returned from Florida that somebody has made a comment about holiday destinations and food. The first was a comment about how Eden should have come back twice her size because of all the crap that we “allowed her to eat.” The more recent one was an implication that we holiday in America because we fit in with “all the other fat people” there. Both family members. Both behind our backs. The second comment in reply to the fact that I was dieting.

Now, what I would like to say here is “I don’t give a fuck what you think, you small minded human”, but I can’t. I can’t say that, because these things are hurtful and yes, they hurt my feelings. I’ll let you into a little secret. I know I’m overweight. That’s why I’m doing bloody Slimming World. And no, I may not have lost all of my body fat in the two weeks that I have been doing the program, but isn’t healthy, sustainable weightloss the goal? I’ve lost 2 and a bit kg in those two weeks – that’s 4.4lbs. It’s not huge, no. But it’s something, and it’s sustainable.

As for Eden and all of the stuff that we “allowed her to eat”, if only that person had a clue! Eden was ill in Florida. At one point I genuinely thought she had sepsis, but it turned out to be a double ear infection and ?tonsilitis. She was so ill that some days all we could get her to eat was grapes and scrambled eggs. So, forgive me if what she ate wasn’t at the front of my mind when it was hard to get her to eat anything at all. Eden is a healthy weight for a two year old and she doesn’t need other people’s food insecurities projected onto her. She is two.

This stuff is why people have food shame. This is why people eat their feelings. This is why people feel like they are not doing a good job, not working hard enough or eating too much. These seemingly throwaway comments that make people feel like the hugest heifers in the whole world are hard to hear. And people shouldn’t have to hear them. Why do you assume your opinion on that person’s weight matters so much? Are you their doctor? Are you actually adding anything to their day by voicing these things?

So, next time you think about making a comment about somebody’s weight, ask yourself a few questions. “Is it any of my business?”, “Would what I’m about to say be helpful to this person?”, “Am I making a comment for the sake of it?” If you still want to make a derogatory comment about somebody’s weight after asking yourselves these questions, you need to take five minutes to go and look in the mirror and ask yourself “Am I perfect?”.

I think I learned my best life advice from the immortal words of Thumper in the Disney movie, Bambi… “If you can’t say anything nice, don’t say nothing at all.” Because words matter. 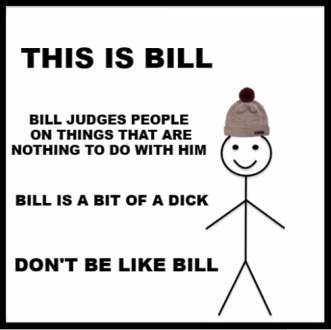 1 Response to People and Their Food Judgements…